This website is to serve as a catalog of historical information for various tanks, across various stages of development, created for use by the United States from Pre-WWII through to the 1970s. However, the primary purpose for this website is to illustrate a proposal for what an "endgame" could look like for the US tech tree in the game, World Of Tanks, and to show that there's still plenty of life left to breathed into this game.
My aim is to see as many tanks in the game about tanks as possible, and I hope to show that in a way that respects both the historicity of the tanks shown and the balance of the game overall. As such, I will not be going into great detail on individual statistics. Rather, I will only be showing the possible modules for each tank, changes that could be made to make it more historically authentic, a historical overview, and how the tank's playstyle may be represented in-game. I will also attempt to future-proof this by including alternate hulls, half-tracks, and wheeled vehicles.
This is certainly not perfect and everything is subject to change. This is still a work in progress, and updates are frequent if not daily. This is a fan project and a labor of love. Do enjoy. 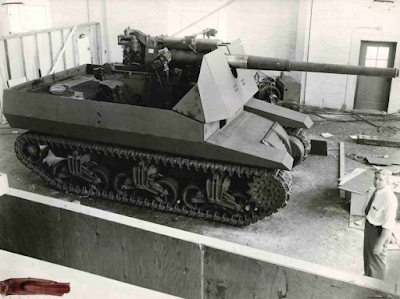 The Canadian Ram tank served as the basis for numerous different designs, from armored recovery vehicles and personnel carriers, to flamethrower tanks and command vehicles. One variation sought to create a self-propelled gun using the British 3.7-Inch heavy antiaircraft gun.

Although the vehicle's appearance was dramatically different, the changes made to it were rather minimal. The superstructure was cut down to be level with the tracks, only completing covering the engine compartment. A new platform was installed with short extensions that can be raised or lowered. However, the vehicle proved to be too top-heavy when firing and was soon abandoned.

The Ram GC would probably be best equated to the German Nashorn. With the platform not deployed, the gun has fairly limited traverse. Given the gun's caliber is slightly larger than the German 8,8 cm, yet was intended to have the same functionality, I would imagine this tank would simply have a bit more raw alpha damage and a little less penetration by comparison. This is also the United States tech tree's only premium tank destroyer option with a six-man crew.

Posted by ThatTrafficCone at 10:50 PM

Search for a Tank

Ads are annoying. Instead, please consider donating if you like what I do.